This is an extended version of my Guardian article from March 2017. 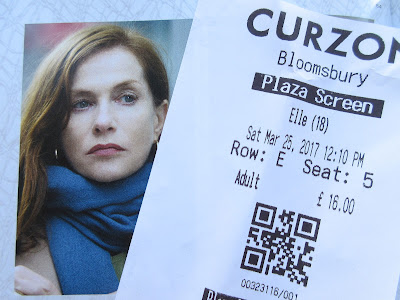 Rape apologists: do you like the cinema? Have you always suspected that women secretly want to be stalked, brutalised and raped? And that the biggest most callous womanhaters on the planet are not men, but women themselves? Then brace yourselves for a celluloid treat.

The film Elle opened in the UK earlier this year and has received rapturous praise,  trailing five star reviews and an Oscar nomination for its star, Isabelle Huppert, who is “utterly arresting” (Peter Bradshaw in the Guardian), “exhilarating…bottomlessly impressive” (Robbie Collin in the Telegraph) and has an “astonishing, almost terrifying talent” (A O Scott in the NY Times).

Huppert is all those things and Elle gives her a lot to do and say, alongside an excellent cast working with a full, dynamic script. But that is separate from the toxicity of the film’s gender politics. Indeed the praise, from an overwhelmingly male critical establishment, shows how entrenched and unquestioned rape culture is.  The film is described as controversial –  but there is nothing controversial about men turning rape into an ambiguous act in which women victims are portrayed as duplicitous, untrustworthy and perverse. All over the world, men rape. And all over the world, other men collude to misconstrue the attack in a way that minimises the rape, muddies the context, excuses the perpetrator and imputes shady motivations to the victim. It happens in court rooms and companies, house parties and political parties, corporate workplaces – and film companies. Elle is no different.

In this “rape revenge comedy” the central character Michele, played by Huppert, does not seek revenge against her rapist. Quite the opposite: she tries to escalate her connection to the rapist once she finds out who he is. And there is no comedy in watching a brilliant performer act out demeaning slanders created by men: Philippe Dijan, who wrote the original novel; Harold Manning, who did the French story adaptation ; Said Ben Said and Michel Merkt, who produced the film; David Birke, who wrote the screenplay; and Paul Verhoeven, who directed the film.

Verhoeven has spoken about how hard it was getting the film made because no US actors would take on the lead role, as if they suffered from some kind of inner female cowardice. Perhaps they were, instead, galled and insulted to read a script bubbling over with facetious speculation about a rape survivor’s psyche. Perhaps they have disdain for a previous film of Verhoeven’s, Showgirls, where the camera lingers greedily over the brutal rape of a young costume designer by a celebrity who gets away with it.

With its beautiful interiors, great clothes and virtually all-white cast, Elle has the same Misogyny: The Lifestyle Edit vibe as Tom Ford’s Nocturnal Animals, another highly praised piece of work in which all the women are mocked, stripped, raped, humiliated, betrayed or murdered. But Elle goes further, ascribing to women a masochistic pathology which somehow excuses the abuse that men choose to perpetrate. Despite Michele’s ex having beaten her, she tells him, “We should still be together.”

In Elle, the ferocious hatred behind men’s sexual violence is nothing compared to women’s masochism, misogyny, venality and irrationality. Men’s brutality is presented as uncomplicated, even attractively virile, while women are apologists for it. Be warned – there are spoilers ahead.
The film opens with Michele being viciously beaten and raped in her Paris home. After a frown of surprise and a day of PTSD, it’s back to life as usual. Michele runs a video game company developing a product in which a woman is raped by a tentacled monster. The victim groans in pleasure but Michele is not happy: “The orgasmic convulsions are not strong enough.”

Michelle and her female friends repeatedly refer to her son’s girlfriend as a “slut”. The young woman is presented as a screaming nag and then shown to be, indeed, “a little slut” when she gives birth to a baby who is clearly mixed race; the dark-skinned baby is used as a racist sight-gag in a film where racial mixing is a greater outrage than rape. The son himself is a womanhater, both physically and verbally threatening towards his girlfriend and his mother, but this male violence is depicted and passed off as the passion of a man pushed to the brink by the women’s behaviour.

Michele is represented as a spiteful, sneaky woman-betrayer with an eye for her friends’ partners. She is disgusted by her mother, who is portrayed as a deluded grotesque who still has a soft spot for Michele’s father, who was a serial killer (yep). Meanwhile, Michele’s neighbour is a wholesome religious maniac who insists upon saying grace before dinner. But don’t worry, her naivety gets its comeuppance.

There are some moments of psychological truthfulness: Michele’s numbness in the immediate aftermath of the attack, which lead her friends to think she is “bravely soldiering on”; her aversion and cynicism about going to the police; the flashbacks and brief fantasy of having fought back; the impulse to buy mace and an axe and enrol at a gun range. And, most correct and chilling of all, the fact that the perpetrators are functional, outwardly nice guys – friends, colleagues, relatives, family men.

But then it gets really gonzo, like full-on Rapist Polanski Brian de Palma Ken Russell sexploitation shtick. When the rapist attacks again, Michele fights back, unmasks him and it’s lust at first sight. Her terror turns to rapture, the fear in her eyes becomes a smoulder of interest. She pursues him with the raw zeal of an unhinged cougar in a ludicrous psychosexual potboiler dreamed up by a club of men who have clearly never listened to an actual rape survivor in all their lives.  The ultimate message, delivered with a smirking shrug, seems to be: men may be bastards, but ladies be crazy! Michele even refers to herself handily as a “psychopath” when recalling a childhood memory of colluding with her father before his arrest.

In Elle, abusive men are depicted as the real victims of women’s demented caprices, while women are portrayed as complicit in their own abuse, as wanting it, engineering it, deliberately provoking it. “The whole ridiculous situation is unbearable,” says Michele at some point, accurately. Soon after discovering the rapist’s identity, Michele has a car accident. She calls the rapist as if he's a friend of hers, and he tenderly bandages her leg while she talks to him in a baiting yet minxy way. Later, during a party, he invites her to the basement and attacks her for a third time, smashing her head against the wall, and she loves it. “Do it!” she cries, prostrating herself – but that turns him off, because he likes to really rape. She eventually induces him to find some inner strength and finish the job, and her orgasmic throes earn a telling look ofopen disgust from him.

Indeed, rank, puzzled revulsion at women’s cravenness is the alpha and omega of the film. In Elle, the only person who enjoys rape more than the rapist is the victim and good old-fashioned male violence is more honest than base, twisted female psychology.

In a punch in the face to all survivors of men’s endemic sexual violence, the filmmakers have recast the perpetrator and his victim as being in some kind of relationship or affair driven by her masochism, in which his abusiveness is simply a necessary fuel. “What’s between us, it’s sick,” she sighs as he, miraculously transformed from terrifying rapist to sullen lover, drives her home like they’re a couple.

It’s a classic, malicious lie, invented by men: that rape awakens women’s sexuality.
Watching Elle, I wondered if Verhoeven or his male club know any women. Do they know that we are not like this, that this is not how we react, think, feel, behave? Do they know what it’s like to survive male abuse, even as a woman as cool and capable as Michele?

Why has the critical reception been so wholeheartedly approving? There was outrage when it was revealed that the actress Maria Schneider was abused onscreen when filming the rape scene in Last Tango In Paris and that the film’s director Bernardo Bertolucci and star Marlon Brando had colluded to set her up and violate and abuse her on camera and film her horror. Why not with Elle? Is it that Bertolucci and Brando are dead, reputations still intact, but misogynist critics don’t want to impede Verhoeven’s progress as a man in the world – because bros before hos? Is it that Elle is too ludicrous to take seriously? Or too confidently presented to be challenged? Surely critics aren’t afraid of speaking up, out of fear that they will look like an unfashionable prude who doesn’t get with Elle’s pacy, racy provocation?


Or perhaps it’s much simpler than that, and after centuries of patriarchy, endemic male sexual violence, victim-blaming, rape myths and male impunity on screen, in life and in court, viewers are genuinely 100% five star fine with unrestrainedly lauding a film in which a woman loves to be beaten and raped.
Posted by Bidisha on Sunday, October 22, 2017