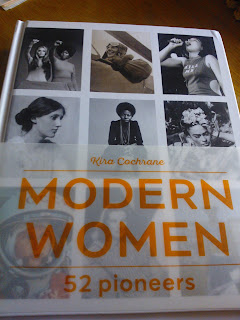 An extended version of a BBC Arts article I published earlier this year. The original piece is here.

It’s not often that one book weaves together the stories of a Russian cosmonaut, an American pilot, a German Resistance fighter, a Kenyan environmentalist, a Japanese mountaineer and an Icelandic pop star. Kira Cochrane’s book Modern Women: 52 Pioneers achieves such a feat. A beautifully produced, inspiring and revelatory edition of potted biographies, it crosses disciplines, countries and centuries, with one aim: to celebrate “women who led really big lives, who broke down boundaries, who make us think differently about the possibilities for women,” says Cochrane.

Modern Women: 52 Pioneers includes celebrated figures like TV mogul Oprah and architect Zaha Hadid, photographers Lee Miller and Dorothea Lange, scientists, athletes, artists and international activists “who pioneered the fight for LGBT rights, who were at the forefront of the civil rights movement, who championed equality and freedom.” Cochrane says it was important to “make sure there was a really big spread of representation, geographically and historically. I [also] wanted to bring to life the stories of women who’re often unheard.”

Cochrane is quite the modern pioneer herself. She is Opinion editor at The Guardian, one of the world’s most-read broadsheets, as well as the author of two acclaimed novels, The Naked Season and Escape Routes for Beginners, and editor of the feminist anthology Women of the Revolution.You could say Cochrane’s glittering career is an indication of how positively things have changed for women over the centuries. The acknowledgements at the end of the book are a sisterly and grateful roll call of Cochrane’s equally-celebrated women peers, colleagues and allies in the British media.


However, reading through the stories of the women in Modern Women: 52 Pioneers, whatever the woman’s profession and whatever century or country she’s working in, discrimination, sexual violence, betrayal, belittlement, abuse, marginalisation  and injustice - perpetrated against men by women - are perennial obstacles. The book reminds us how far we’ve come, how much is possible for women, and yet how much still stands in our way. 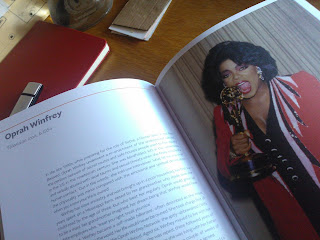 I’m interviewing Cochrane at her home on a rare day off. At the end of the garden is a beautiful white wooden writing shed, its desk and floors stacked high with hundreds of in-depth studies of the lives and work of the women in the book. The stacks represent “this huge swathe of biographies, written by other women, over the last fifty years. What’s happened since 1970s feminism is a huge number of women authors making sure other women aren’t forgotten. It’s been a revolution on the bookshelves,” says Cochrane.

Leaning against one wall is a huge cork board (below) of pinned black and white pictures of stars from the heyday of old Hollywood: inspiration for a possible new novel. “The best times in my life, the most euphoric moments have been writing fiction…like you were flying, like you were in another world. And that makes up for the other times when you’re agonising because you can’t make this perfect thing in your head translate onto the page.” Cochrane’s rich and ready humour and gorgeous treacly voice remind me of Frances de la Tour and indeed it’s no surprise to find out that at the very beginning of her career, it was a toss-up between acting and writing; “writing a novel,” she says, “is the closest thing to acting because you’re thinking your way into a character.” 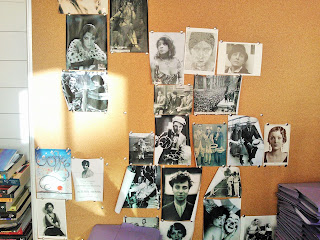 When we return to talking about Modern Women and I marvel at the research she’s done, she says gleefully, “When I’m in, I’m all in! It was a real joy to absorb myself with the worlds of other women, who in every case were phenomenally accomplished but also courageous, who got on with it and took a risk. I’d hope Modern Women is a positive contribution to the [feminist] movement, so people can read it and feel uplifted and inspired by all the work these incredible women have done.”

Modern Women: 52 Pioneers by Kira Cochrane was published on 2nd March by Frances Lincoln
Posted by Bidisha on Sunday, October 22, 2017