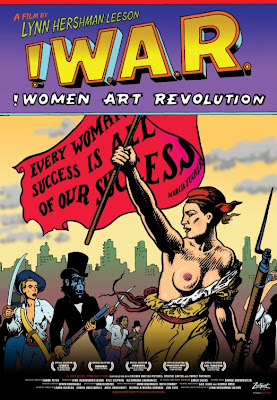 I am writing to celebrate the film Women Art Revolution, poster image above, which is being showcased by one of my favourite London galleries, the Whitechapel. For over forty years, Director Lynn Hershman Leeson has collected hundreds of hours of interviews with visionary artists, historians, curators and critics who shaped the beliefs and values of the Feminist Art Movement and reveal previously undocumented strategies used to politicize female artists and integrate women into art structures.

!Women Art Revolution elaborates the relationship of the Feminist Art Movement to the 1960s anti-war and civil rights movements and explains how historical events, such as the all-male protest exhibition against the invasion of Cambodia, sparked the first of many feminist actions against major cultural institutions. The film details major developments in women’s art of the 1970s, including the first feminist art education programs, political organizations and protests, alternative art spaces such as the A.I.R. Gallery and Franklin Furnace in New York and the Los Angeles Women’s Building, publications such as Chrysalis and Heresies, and landmark exhibitions, performances, and installations of public art that changed the entire direction of art. New ways of thinking about the complexities of gender, race, class, and sexuality evolved. The Guerrilla Girls emerged as the conscience of the art world and held academic institutions, galleries, and museums accountable for discrimination practices.

Over time, the tenacity and courage of these pioneering women artists resulted in what many historians now feel is the most significant art movement of the late 20th century. Carrie Brownstein composed an original score to accompany the film. Laurie Anderson, Janis Joplin, Sleater-Kinney, The Gossip, Erase Errata and Tribe 8 are some of the gifted musicians who contributed to our soundtrack.

About Lynn Hershman Leeson:
Writer / Director / Producer / Editor Lynn Hershman Leeson pioneered site specific, performance and interactive media. Most recently, she was honored by the Digital Art Museum in Berlin with the d.velop digital art award (d.daa), the most distinguished honor for lifetime achievement in the field of new media. Her other honors include the prestigious Golden Nica Prix Ars Electronica, the ZKM/Seimens Media Arts Award and, as a Sundance Screenwriter Fellow, she was honored with the Flintridge Foundation Award for Lifetime Achievement in the Visual Arts. She has also received The Alfred P. Sloan Film Prize for writing and directing Teknolust, and in 2006, the International Association of Digital Arts award for “innovative storytelling,” Zero One Prize for “Media that Matters” and a Creative Capital Grant for her documentary, !Women Art Revolution. In 2009, she became a Guggenheim Foundation Fellow and received a Lifetime Achievement Award from Siggraph. Hershman Leeson wrote, directed and produced the feature films Teknolust, Conceiving Ada and Strange Culture, in addition to 14 other films and shorts. The films starred Tilda Swinton, were shown at the Sundance Film Festival, Toronto International Film Festival and Berlin International Film Festival, and were all internationally distributed. Her artwork is held in numerous collections, including at the Museum of Modern Art (New York), The National Gallery of Canada, DG Bank (Frankfurt) and The Walker Art Center (Minneapolis). She has published extensively, is the Chair of the Film Department at the San Francisco Art Institute and Emeritus Professor at the University of California.