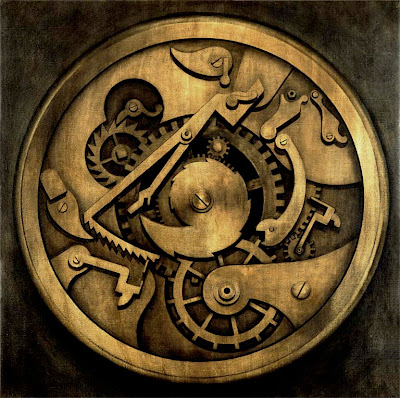 Sigismund’s Watch: A Tiny Catastrophe is an exhibition of paintings and images on paper by Barbara Loftus,
curated by Monica Bohm-Duchen at the Freud Museum in London. It will be on from 5th October - 13th November 2011.

We must rid ourselves of the delusion that it is the major events which have the most decisive influence on us. We are more deeply and more continuously moved by the tiny catastrophes that make up daily life

Sigismund’s Watch: A Tiny Catastrophe is a cycle of artworks prompted by the recollections of the artist’s mother Hildegard, who fled from Germany to England as a Jewish refugee in 1939. The story is told through a series of oil paintings and works on paper, vividly contextualised by documentary images and quotations from the Weimar period. Sigismund’s Watch narrates a ‘primal scene’ from the early 1920s, recalled by Hildegard in old age, when, as a small child, she witnessed, unseen by her parents, a bitter marital row. The cause was her father Sigismund’s bankruptcy, which inflicted sudden impoverishment on their comfortable bourgeois way of life. Hidden under the table, she saw her mother tear her father’s gold pocket watch from his waistcoat pocket, stamp on it and smash it. 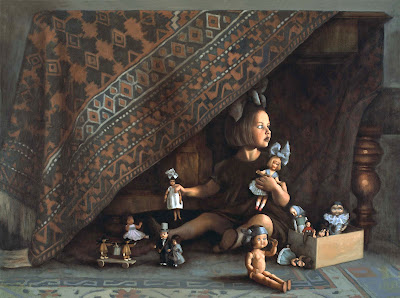 The smashing of the watch becomes for Loftus a potent and poignant symbol – standing for the chaos into which Hildegard’s family and many others were plunged overnight. The ensuing climate of fear, suspicion and destabilization in the collective psyche dealt a fatal blow to the fragile concept of the German-Jewish symbiosis. The historic equation of the Jew and money re-emerged as the scapegoat for the failing mark, and the brutalising effects of hyperinflation helped undermine the Weimar Republic and lay the foundations for the Third Reich and the rise of Hitler. 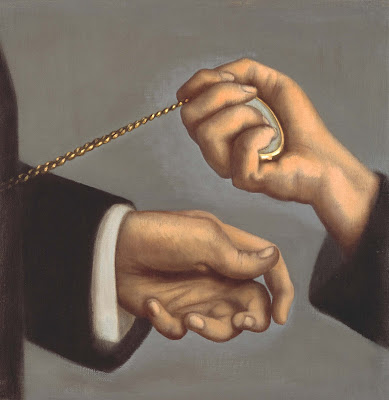 Loftus’s working methods are complex and distinctive: her mother’s spoken (and recorded) testimony, combined with detailed archival research, enabled her to instruct professional actors to recreate the scenes she imagined in her mind’s eye. Photographs and film of this re-enactment formed the basis for a dramatic sequence of drawings and cut-out silhouettes, which in turn gave rise to a series of oil paintings, which although naturalistic in style, pare the narrative down to its eloquent essentials. Transcending its historical sources, Sigismund’s Watch is a subtle and sophisticated meditation on the meshing of time and memory, gender, marriage and money, power, history and the act of bearing witness.

For further information, images or interviews with the artist please contact Penny Sychrava at 0796 791 5339 or pennysychrava@hotmail.com
BIOG:
Born in London in 1946, the daughter of a German-Jewish refugee (who until 1994 spoke very little about her past) and an Anglo-Irish communist, Barbara Loftus trained first at Harrow School of Art and then at Brighton College of Art. Since 1970 she has exhibited widely with exhibitions at the Serpentine, Barbican and ICA. Sigismund’s Watch is the third in what the artists sees as a trilogy of on-going projects dealing with aspects of her mother’s history: the other two are A Confiscation of Porcelain (1994) and German Landscape with Wandervogel (1998).