Feminist campaigners are to stage protests at the opening of a new Playboy Club in London ’s Mayfair on 26th May and 4th June. 26th May is the Playboy Club’s press night. Campaigners will be present outside from 8.30pm. Playboy Club is situated on 14 Old Park Lane, Mayfair, London. W1K 1ND. 4th June is the official opening night of Playboy Club. The protest Facebook event is here. 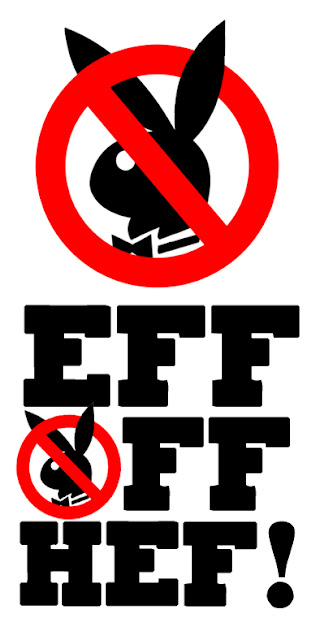 The event is convened by OBJECT, the human rights organisation which campaigns against the sexual objectification of women, and UK Feminista, the national network of activists campaigning for equality between women and men. Picketers will greet Playboy founder Hugh Hefner, who is flying over from Los Angeles for the launch, with calls to, “Eff Off, Hef!”

The new club comes 30 years after its predecessor establishment, which was also based in Mayfair , closed after a police raid for suspected gambling irregularities (5). Playboy clubs are just one of a myriad of products licensed by Playboy Enterprises, an international pornography corporation whose outputs include a mix of pornographic films, websites, TV programming and children’s stationary.

But whatever product Playboy stamps its logo on, the basic brand concept is the same: woman reduced to sex object for man’s sexual satisfaction - and Playboy’s financial gain. Naturally Playboy Club London embodies this brand, offering champagne and sexism. So Eff off, Hef. And take your club with you.

It is time to cut through the crap of the Playboy PR machine. Sexualising and objectifying women as bunny rabbits is not sexy and it is not empowering. It is sexist, and everyone knows it. This is why hundreds of women and men across the country are signing up to the OBJECT and UK Feminista campaign to object to the opening of the new Playboy club. Our message is clear - ‘Eff off Hef and stop degrading women!