Amalia Pica has been commissioned by Chisenhale Gallery to produce an offsite artwork to take place in the London Borough of Tower Hamlets. I am Tower of Hamlets, as I am in Tower of Hamlets, just like a lot of other people are, (2011) is described by Pica as a nomadic sculpture which will leave her studio at the beginning of July 2011 and over the course of one year will be hosted by residents of Tower Hamlets. 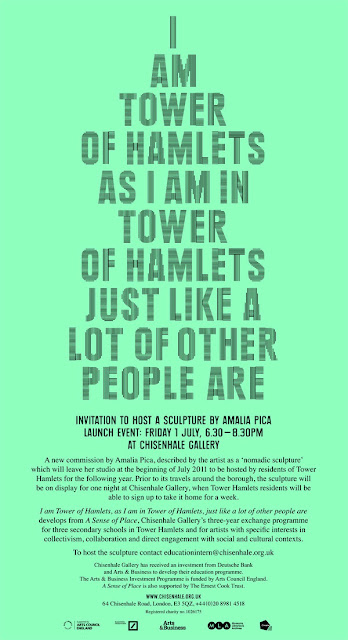 I am Tower of Hamlets, as I am in Tower of Hamlets, just like a lot of other people are, stems from research made during Pica’s year-long residency at three Tower Hamlets’ secondary schools through Chisenhale Gallery’s A Sense of Place programme. Now in its third year, A Sense of Place, is Chisenhale Gallery's flagship exchange programme for three secondary schools in Tower Hamlets and artists with specific interests in collectivism, collaboration and direct engagement with social and cultural contexts. Chisenhale Gallery has received an investment from Deutsche Bank and Arts & Business to develop their education programme. The Arts & Business Investment Programme is funded by Arts Council England.

Hand carved by Pica in pink granite, the sculpture is based on the Echevaria plant (the name is a mis-spelling of the surname of the 18th century Mexican botanical artist, Atanasio Echeverría y Godoy), a species native to South America but popular in domestic environments world wide due to its ability to thrive under any condition.

Residents of Tower Hamlets are invited to look after the sculpture for one week, then pass it on to the next participant. This exchange will happen every Saturday throughout the year. The sculpture’s travels will be recorded on a ‘lending card’, serving as a document of the meetings and exchanges between neighbours that made its journey possible. In June 2012, the sculpture will return to the gallery where it will be on display and an event will be held to commemorate its return.

Pica’s wide-ranging practice includes sculpture, drawing, photography, installation and film. I am Tower of Hamlets, as I am in Tower of Hamlets, just like a lot of other people are continues Pica’s interest in exploring the frameworks and cultural resonances of public sculpture and interventions into public space, while addressing ideas of collective memory through the precise materiality of the sculptures she produces. The work addresses the conventions of participatory art practice and the immediacy of individual visual perception grounded within an intimate encounter with the artwork.

On 1st July 2011, 6.30-8.30pm Chisenhale Gallery will host a launch event at the gallery prior to the sculpture’s travels around the borough, where the sculpture will be on display and Tower Hamlets residents will be able to sign up to participate in the project.


Biography:
Amalia Pica was born in Neuquén, Argentina in 1978, and lives and works in London. She was a resident artist at the Rijsakademie in Amsterdam in 2004 and 2005. Group exhibitions include Hayward Gallery, London (2010); Kunsthalle Basel (2008); Encuentro Regional de Arte, Montevideo (2007); Stedelijk Museum, Amsterdam (2007); Platform Garanti, Istanbul (2006) and the Liverpool Biennial (2006). Solo exhibitions include C-sale at Malmo Konsthall, Sweden (2010); Galerie Diana Stigter, Amsterdam (2010); Marc Foxx Gallery, New York (2010); and Artis Den Bosch (2008). Pica is also one of the participating artists in the 54th International Art Exhibition of the Venice Biennale 2011 and currently has a solo show at the University of Michigan Museum of Art.
Posted by Bidisha on Friday, May 27, 2011