Commissioned by the British Library for their Discovering Literature archive of commentaries on 20th Century literature in English. View the original here. 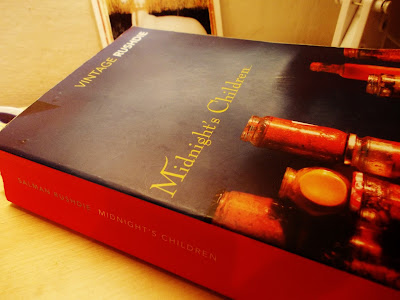 Midnight’s Children (1981) is a faux autobiography in which personal farce and political realism fuse, only to disintegrate into contingency and absurdity. Its narrator, Saleem Sinai, elides the story of his own childhood with that of India itself, having been born at midnight on the day of India’s independence from British colonisation. Saleem asserts, “To understand just one life, you have to swallow the world”, and this elastic novel twangs enjoyably in all directions to encompass its narrator and his relatives as well as the nation and its inhabitants. The rococo approach to narrative is mimicked in the physical form of the narrator himself. There is no grotesquery with which Rushdie doesn’t endow Saleem: he has bulbous temples, a bald spot, an enormous nose and a bit of his finger is missing. His self-mythologisation, as he admits, can easily be read as the revenge fantasy of a nobody, particularly when Saleem describes being at a school dance where all the popular boys, including one with the surname Rushdie, get the best dance partners.

The novel makes great sport with the Orientalist conception of India as being a “dream”, a “myth”, a “mass fantasy” in which Indians’ experiences are nothing more than exotic diversions like those cooked up by Scheherazade. Rushdie refers to The Arabian Nights throughout the novel; despite its Western cultural status as a go-to for stereotypes about the Middle East, he reminds us at the same time that telling stories is a way of ensuring our own survival.

Rushdie’s notion of India as a “collective fiction” of “myths fantasies nightmares” has political as well as artistic meaning. In the novel, Independence and Partition push a vast and varied human and geographical territory into new identities and self-definitions. “Beyond the door, history calls,” Saleem reminds himself, although his (and everyone’s) version of history is skewed by emotion and subjectivity. Saleem frequently breaks off to rebuke himself for an error in his own chronology, lamenting, “although I have racked my brains, my memory refuses, stubbornly, to alter the sequence of events.” Thus the linear structure of Midnight’s Children suffers amusing hitches and hiccups as the narrator encounters the impossibility of creating a definitive version of the past.

Despite his deficiencies as a historian, Saleem is proudly a narrator from the TV and cinema age, offering soap opera style hints of what’s to come. He has mastered the most sensational and satisfactory storytelling arts: the “generalised macrocosmic” mode incorporating “matter of fact descriptions of the outré and bizarre, and their reverse, namely heightened, stylized versions of the everyday.” His family’s fortunes are described using the set pieces, broad slapstick, swift action and overblown emotions of the mainstream Indian cinema hit. Rushdie makes this approach explicit, likening a novelist’s take on history to the experience of sitting far enough back at the cinema for the image onscreen to be clearest: “the further you get from the past, the more concrete and plausible it seems.” In one of the novel’s countless and obvious ironies, Saleem’s own uncle is a screenwriter determined to restore emotional subtlety and socialist realism to the Indian screen.

At its most serious, Midnight’s Children is a study of the aftermath of colonialism as Saleem’s family move from the pre-Partition Kashmiri valley to Amritsar, Agra, Delhi, Bombay, Pakistan and back. The violence and callousness of colonial exploitation is made clear in a description of 1947 as being the year a “soldier’s knife…cut a subcontinent in three.” The suffering which remains is reflected in the repeated image of a desperately reaching hand. The hand appears in the bloodlike betel juice spat out by men on the street, the charred detritus of an arson attack by a mafia-style local political group and in “the handlike peninsula” of India’s pre-colonial geography. Meanwhile, subtler effects like the internalisation of colonial racism are reflected in the Indian characters’ dislike of darker skin, the symbolic increase in vitiligo (the skin disease which leaches pigment from the skin and turns it white) after Independence and the requirement that new Indian occupants of a former coloniser’s estate must live surrounded by the interloper’s old possessions.

At the same time – and I wonder if this is a deliberate or an unconscious reflection of internalised colonisation – the rambunctious tone and picaresque structure of Midnight’s Children strongly recall the English canonical novelists Sterne and Richardson. There is also a classic Victorian Gothic twist in Rushdie’s tale: Saleem is not really telling the story of his own family. He and another baby, born at the same time in the same hospital, were switched at birth. The real son of Saleem’s parents is condemned to a life of destitution and desperation. Named after a destructive Hindu god, this other son, the real one, is an outcast. Saleem’s shadow self – conscienceless, desperate and callous – is the blunt opposing principle to the narrator’s sensitivity and circumlocutions and the thing he fears most. Despite their Dickensian birth accident (or birth experiment), both boys represent true, common versions of India. They also highlight a further anxiety within the novel: the Freudian patriarchal terror that a boy presented to a man as his son is not really his own.

Midnight’s Children blends its European, Middle Eastern and South Asian roots, its cinematic and literary inspirations, into a potent chutney – to use another of the novel’s ongoing images. As in the best of chutneys, you can’t tell what exactly you’re putting in your mouth. Eliding Eastern conjuring and storytelling traditions with the Victorian fascination for occult communication with the spirit world, Saleem makes an outrageous suggestion halfway through the novel. He claims that all the Indian children who were born at midnight on the day of Independence were imbued with magical gifts. In an obvious (and acknowledged) nod to the novelist’s own art, Saleem’s gift is to get into other people’s minds and see the world through their eyes.

The other children’s gifts are familiar to any reader of folk tales the world over: children who can enter a mirror and emerge through a mirror in any other place; who have the power of healing, prophecy or time travel; who can change appearance at will, and so on.

These magical traits have been described universally in fairytales across the globe, but there is a hard social realism underneath Saleem’s delusion. The “children of midnight” come from all corners of India and many are likely to slip down between the cracks in society unless they can, as if magically, use their gifts to transform their fortunes. The children encapsulate both the modern potential of the country and its timeless imaginative possibilities. Indeed, well away from the plotline of the magical children, many characters meet their deaths in ludicrous ways which seem fantastical but are presented as straight, though ignoble, fact. Assassins are mauled by stray dogs; murder victims use their whistling skills to disconcert their assailants; men are bitten in the neck by camels or in the foot by snakes; they choke on the pips of an orange, get run over on their way to a political protest or fall into the sea clutching a giant concrete tetrapod. Personal egotism meets hubris while political intensity is defused by the ridiculous. Using the recurring image of a game of Snakes and Ladders, people rise and fall, often randomly.

Despite all this alacrity, brilliance and sweeping momentum, the novel’s attitude to its women characters is depressingly standard. The women are virtually all cheats or prudes (or, somehow, both), gossips, shrews, nags, temptresses, superstitious, fanatics, stubborn, irrational and petty. There’s stupidly giggling, flirty cousin Zohra, Vanita the cheating wife of a street entertainer, Mary the nanny who is a “little woman…tiny…tearful… plump.” Saleem’s three female neighbours are “tiny flustery hapless”, “a cipher” and “promiscuous”. A family friend’s female relatives are “giant… outsize… their behinds overflowing”, while, in passing, the narrator spots a “fat Englishwoman” and “a fisherwoman whose sari was as tight as her morals were loose.” Women’s immorality – defined narrowly as whether they are faithful or not – is unambiguously punished, without any of the scepticism and understanding which feature everywhere else in the novel. Yet the narrator’s father, in this partly autobiographical novel, sexually harasses his secretaries for decades and is still depicted by the novelist with fullness, pathos and humanity. His victims flee by “flouncing down our drive” as if they are ridiculous. The one female character who is written about with warmth, although she is still nothing more than a stereotype, is Padma, the bossy housekeeper whom the narrator is reading his pages to as he writes them. Padma is the narrator’s devoted servant and as her master, Saleem makes full use of her cooking, housekeeping and sexual labour: “I recount, she is recounted to; she ministers and I accept her ministrations.”

Midnight’s Children’s exhaustive and exhausting agglomeration of recollections large and small, its post-modern self-awareness and thinly veiled ironies scream untrustworthiness. The apparent congruence between narrator and nation, history and the representation of history, is not to be taken at face value: “As a people, we are obsessed with correspondences. Similarities between this and that, between apparently unconnected things, make us clap our hands delightedly when we find them out. It is a sort of national longing for form – or perhaps simply an expression of our deep belief that forms lie hidden within reality…”

Thus warned, the reader opens Midnight’s Children to embark upon an all-enveloping joyride through the story of a country, the fortunes of a family and the ego of an infuriating but always entertaining narrator.
Posted by Bidisha on Friday, October 28, 2016