This is a reprint of a review I wrote for Poetry Review earlier this year. 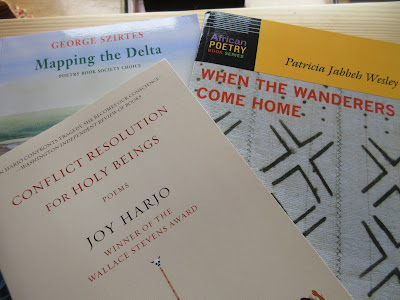 Roots and belonging, journeys and homecoming, the fallout from conflict, the raging political self and the devastated personal self all feature in these three topical collections. Joy Harjo sings the long song of Native American history with bluesy devotion, Patricia Jabbeh Wesley returns to her native Liberia from America to scour the remains, collect war stories and find herself while George Szirtes watches with an ironical eye as people come and go, falling in love, travelling, experiencing bereavement and somehow moving on.

Conflict Resolution for Holy Beings is a fierce summoning, opening not so much with a dedication as an anointing: “Bless the poets, the workers for justice, the dancers of ceremony, the singers of heartache, the visionaries”. Joy Harjo’s elision of poetry, song, activism, physical movement, lament and prophecy imbues her collection with an exhilarating vitality. Harjo is a Creek Nation Native American, yet she does not write resigned elegies to a lost people or an erased culture. Instead, her identity gives her poetic voice a hearty survivalism, an earthy constancy and great humour. In ‘Calling The Spirit Back From Wandering the Earth in its Human Feet’ she counsels the reader in a magazine list of half ironic affirmations, rejecting self pity in favour of the larger story of group survival: “Make a giveaway, and remember, keep the speeches short./ Then, you must do this: help the next person find their way through the dark.”

Harjo’s poems jazz-step from one to the next, with evocations of cool urban life interspersed with untitled, dry, best-friend jokes like “Do not feed the monsters./ Some are wandering thought forms, looking for a place to set up house” and stunning natural imagery in which a panther “is a poem of fire green eyes and a heart charged by four winds of four directions”, as in the long title poem at the heart of the collection.

In easily flowing conversational lines, Harjo fuses the mythic with the realist, the sentimental with the elemental. In ‘Talking With The Sun’ she comments casually, “I walked out of a hotel room just off Times Square at dawn to find the sun.” Yet she is no idler; the walk is part of a ritual to present her fourth granddaughter “to the sun, as a relative, as one of us.” The poem closes with her, the sun and the baby joined in “this connection, this promise.”

Connection is the driving impulse behind this collection, which is full of images of singing and dancing and invitations to a collective celebration, where even sorrow is shared. In ‘Mother Field’ the narrator can’t resist “the music humping through the door” of a bar. Later, in a brilliant image, she writes that “Midnight is a horn player warmed up tight for the last set.” Like a consummate band leader the collection carries us through the darkness, just as Harjo instructed in that early poem. It ends, indeed, with a lovely tribute called ‘Sunrise’, in which we all “move with the lightness of being, and we will go/ Where there’s a place for us.”

In Patricia Jabbeh Wesley’s powerful When The Wanderers Come Home, the search for a place of arrival, self-recognition and remembrance continues, but doesn’t find a resting place. Wesley was born in Liberia but settled in America; this pained and poignant collection focuses on her return to Liberia. She traces relatives, interviews women war survivors and figuratively and literally searches through the detritus of violence, poverty and natural decay to uncover the past. In ‘Erecting Stones’ the past is fragmented, “trash”, “debris”, “broken pieces” mixed up with “remnants of bombs…missile splinters, old pieces of shells.”

In ‘Coming Home’ Wesley describes “dust from the past,/ eating away the present” and indeed the whole collection carries a note of wariness, a fear of imminent violence, of impermanence and mistrust in which history is always threatening to repeat itself and “Liberia smells again of corpses” (‘Send Me Some Black Clothes’). In the aftermath of violence, the text crawls with images of decay, of consumption by scorpions, locusts and termites, “the eater of all life”. Wesley sees herself not as a noble witness or a returning countrywoman but “an outsider, at the doorpost” (‘So I Stand Here’) who is “standing among caskets” (‘Send Me Some Black Clothes’), “a lone traveller/ without a country” (‘In My Dream’).

The Liberia of Wesley’s childhood has been transformed into a place of numb, shell-shocked survivors – “death was more alive than us,” she writes, devastatingly, in ‘The Cities We Lost’. In ‘Becoming Ghost’ she conducts interviews with women who have survived unimaginable abuses and considers “how each one of us carries between our/ breasts, stories no one will believe.” Despite the brokenness of what she describes, Wesley’s poetic form is smooth and steady, the neat stanzas and non-rhyming couplets capably containing the most shocking revelations. The horror is belied, however, by the line breaks, which do not occur at the natural end of a thought or image but as a gasp of awful realisation – as when the sun falls “on the backs of children/ who may never grow up” (‘I Go Home’).

Wesley pays particular tribute to women’s resilience, from the South African protest singer Miriam Makeba whose band’s records sounded “as though its players were born playing” to an ode to Hurricane Sandy, in which she jokes that “A woman by herself is category 7 hurricane.” There are further works written on journeys to and from Colombia, Libya, America and Morocco, but at heart When the Wanderers Come Home is a grieving love letter to Liberia, a country that contains her story just as she tries to contain all its stories, woman and country intertwined like “branches and limbs of the same oak” (‘When Monrovia Rises’).

Both When the Wanderers Come Home and Conflict Resolution for Holy Beings express the determination to pay testimony and bear witness, sorrow at the repetitiveness of human cruelty and the ferocious optimism of artists determined to resist, rebuild and revive. Joy Harjo collects us in a defiant party against the darkness while Patricia Jabbeh Wesley carefully pieces together the lost stories of the living dead. Meanwhile, George Szirtes offers an airily delicate and tender take on belonging. Mapping the Delta portrays human life as a precious daily struggle of small victories in which human encounters like love affairs, artistic anxiety, hotel stays and hospital visits are bright pinpricks compared to the inscrutable largesse of nature. Mapping the Delta is a subtle, panoramic work which starts with the distant but affectionate focus of the title poem, in which time and tide literally wait for no man:

The river was charted but now the tide rises
and presses on and moves between tongues
of land to emerge in a mouth that blazes
with its own ideas, its own flickering songs.

The happy idea of the natural world singing, of the earth generating its own verses in its own language, flows through the collection, as does the appreciation for conversation generally. There are constant references to social groups, singing and lively banter : a crowd in a cinema queuing excitedly to watch an early talkie, a drunk man muttering in a bar. ‘The Voices’ is a daft riot in which the night streets reverberate with voices “shouting nonsense…reiterations, cries, endless repeats”, its easy rhymes – floor/door/more, stairs/bears/affairs – creating a riddling verse that is both a descriptive celebration and an expression of human exuberance.

Compared to messy humanity, nature is sober, eloquent and a good listener. In ‘Listening to the Weather’ the narrator imagines an entire landscape focused on the sound of itself as the rains break and “words poured/ out of drains into gardens”. The landscape is in dignified private conversation with itself: “when the winds spoke…the rain heard.” The earth is sentient, while seemingly still things are full of tension: “The lake strained to hear/ the utterances of light”.

Despite the impeccable, featherweight construction of the poems, their breathy rhythm and modish references to everyone from Elaine Feinstein and Auden to Bruno Schulz, Chet Baker, Bartók and Rembrandt, this is not a whimsical metropolitan amusement.  Mapping the Delta touches upon nearly every meaningful human experience, every ‘moment’ in a lifespan, from falling in love to losing a parent – as in the beautiful, long sequence The Yellow Room, Szirtes’s cautious and ambivalent rumination on his late father, “you mystery, father of diminishing returns”.

Mapping the Delta wears its emotionalism lightly and its beautiful images modestly. Best of all, it carries its sweet hope and garrulous humour with life-affirming pride; an important corrective when so much else in the world seems dark and devastated.