The night I callously defrauded a penniless Burmese child

The eyes of the world are on as the fight continues to move towards democracy and away from militarism, division and violence. The incarceration and liberation of democracy and human rights leader Aung San Suu Kyi followed a longstanding and powerfully mythic template of gendered superstition, symbolic objectification and beatified mortification: female strength, female isolation, female suffering, female stoicism, female beauty, female purity, female fortitude, female spiritual endurance despite being stripped of everything, female forgiveness towards persecutors and a victory gained through surviving the longest under unjust mental and physical duress, not fighting the hardest in open and equal mutually granted combat. In the years that follow the unglamorous, quotidian labour of working towards democracy, development, integration and sustainability must be undergone and there are many problems to solve.

As one strand of their global activities Health Poverty Action have launched a campaign reaching out to thousands of struggling people living in rural, remote areas of Burma. They write,

In this forgotten area of Burma, conflict has forced 100,000 people - mostly women, children and the elderly - to flee their homes and live in displacement camps.  They have no access to running water. There is not enough food. The freezing conditions and lack of toilets make them vulnerable to disease.

Nearly 50% of children under the age of 5 in the region will die, usually from easily treatable conditions including malaria or diarrhoea. Medical teams are working there to assist children and their families in providing vital basics: HPA has been helping feed 9,500 people, immunising 2,000 children, assisting over 500 women to give birth safely in the camp clinics and installing 350 toilets to improve sanitation. 36,000 people are currently living in the worst affected areas and money is needed to provide basic support there. Health Poverty Action stress that a £20 donation could immunise four children, provide two months’ food for a child living in a displacement camp, provide three quilts for families in mountainous areas which get very cold or provide two days’ training for camp volunteers looking after the whole community.

The charity ActionAid are also advocating and campaigning on behalf of Burma, which they are terming . I call it because Aung San Suu Kyi does. Although has more international links and exchanges than it did before, there are still very few outreach, aid and charity programs serving its poorest communities. ActionAid’s vision takes in the country as a whole and its focus is on broad-scale development and the establishment of basic services and infrastructures. In particular, they highlight the necessity of access to clean water, to education and to healthcare. They also point out, shockingly, that in “one child in every 10 dies before the age of five.” A basal 10% infant mortality rate, rising to nearly 50% in displacement camps in remote regions, is extremely alarming.

Conditions were worsened by Cyclone Nargis in 2008, in response to which ActionAid mobilised to assist 200,000 people in Burma and established a national system providing staple food supplies, educational facilities and health stations to those most in need.

ActionAid also offer international supporters the chance to sponsor a child in , in a scheme which first launched in 2012. They cite a Fellowship Programme which trains young Burmese volunteers (er – if they’re unpaid volunteers then where does the sponsorship money go? Labour should be paid – white ActionAid staffers in the get paid a salary after all) to work with remote communities, tackling the complex challenges that arise when trying to lift societies out of poverty. The work needed varies from establishing infrastructure like well-maintained road networks, agricultural training for sustainable farming practices and microfinance to empower people in starting up small scale enterprises.

We have worked with over 390 communities, supporting more than 150,000 of the most vulnerable and marginalised people [worldwide].

As I filled out the first part of the form I felt increasingly self-critical about sponsoring another human being, like hiring some sort of pity pet, an individual I would never meet or speak to, just to make myself feel good. This person would never be positioned as any kind of equal but instead would be a distant and exotic source of self-congratulation, a faraway star lighting up my own ego, a collection of clichés about poverty and development, an object onto which various fantasies could be projected. Here are some subtextual justifications, arrogant self-compliments and snobby secret thoughts which underpin the actions of a child sponsorer (it’s just like being a horse whisperer except that you don’t even need to get close to the recipient to establish that special connection):

So, I had some ideological oppositions to it. I would much rather donate directly to projects for everyone and, let me make this pledge to ActionAid now, I would be very happy to travel to Burma to volunteer in the long term doing anything you want, from manual labour to teaching, and also report back and raise consciousness.

I junked the application midway, before I'd given the Internet my credit card details. A few days later I received a piece of paper from ActionAid. It was green and on the front was written in jaunty white lettering, ‘Child Message from Myanmar’, above a cartoon of a big-eyed, happily smiling yet barefoot kid in traditional Burmese dress, with, yup, a flower in her hair, holding a brightly coloured parasol and with not one but two extra parasols lying on the ground next to her. Part beanie baby, part Disney Princess, part prostituted child in brothel window forced to eye the punters beguilingly. 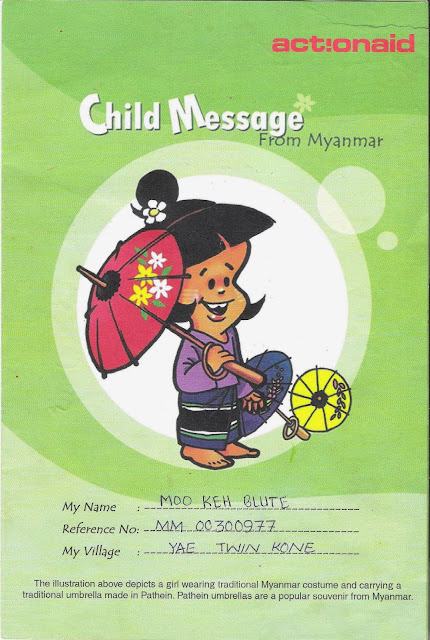 At the bottom of the leaflet it said, “The illustration above depicts a girl wearing traditional costume and carrying a traditional umbrella made in Pathein. Pathein umbrellas are a popular souvenir from .” I love it when sexism and racism come together: it’s like acquisitive colonial nuclear fission. An infantilised female, used as an object to unthreateningly boil down and sell an exoticised region to a cultural tourist. The message is loud and clear: this is what you’ve bought. : she’s cute, she's not pushy, she's definitely not angry, she’s innocent, she’s traditional (note the word being repeated twice in the leaflet sentence) and she’s designed to please. You don’t get an actual photograph of an actual human being because, North or West, South or East, whatever the language or culture or country, the objectified, sexualised, depersonalised, minimised, infantilised all-purpose female cartoon image is easier to use and provokes more sympathy than a real human female.

Coming next in the series:


I opened the leaflet and there was a hand drawn picture inside: 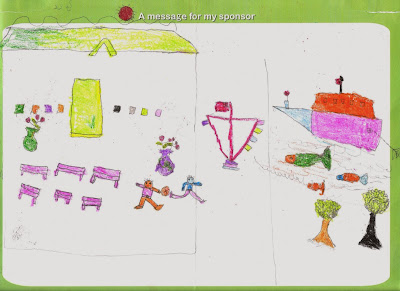 On the back was a message from Mar Ku, the field worker looking after ActionAid’s project in the village of Yae Twin Kone. It was handwritten in careful English capitals. 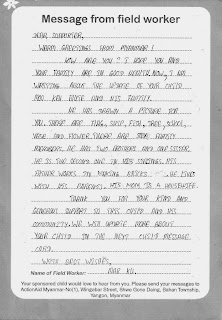 How are you? I hope you and your family are in good health. Now, I am writing about the update of your child Moo Keh Blute and his family.

He has drawn a picture for you. There are flag, ship, fish, tree, school, vase and flower. There are six family members. He has two brothers and one sister. He is the second one in his siblings. His father works in making bricks. He lives with his parents. His mom is a housewife.

Thank you for your kind and generous support to this child and his community. We will update more about your child in the next child message card.

And then, obviously, I felt dreadful.

“You mean,” said my mother, “you’re sponsoring a child, without paying anything?”

It seemed so, mum. It certainly seemed so.

What does this signify on the part of ActionAid? That when you think you are sponsoring an individual, you are not really doing so but instead having your money pooled and used generally for everyone? I am not against that. That when you provide your name and address via a web site, it will immediately be sent to a Burmese community project that has various already-done kids’ drawings on file to send to you to make you feel like they’re responding directly, when really no individual child has any idea who you are? That a field worker like Mar Ku, who no doubt has plenty of much more worthwhile work to do, has to go through the charade and labour of hand-writing updates to each supporter so that they feel they’re getting their interpersonal money’s worth? That when you think you’ll strike up a relationship of patronage with one kid - or, to put it less cynically, you will have the feeling of supporting one child's path in life - you will actually receive standard communications from a field worker writing automatically on their behalf? I am not against that, either. In fact I approve of what is really going on. I am critical, instead, of the illusion: that patronising, ignorant westerners think they are reaching out to one grateful Burmese child in a million and that a charity would encourage this problematic illusion when the reality of its work is much more credible and worthy of respect.

If any established charity is doing medium to long term outreach work in , I would love to be involved and can be contacted at bidisha.contact@gmail.com

Bidisha is a 2013 Fellow of the International Reporting Project, covering global health and development.
Posted by Bidisha on Thursday, December 05, 2013