Spread the Word about a gorgeous new anthology called Edgeways

I've worked with and admired the London based literary organisation Spread the Word for as long as I can remember. Spread the Word support the city's most exciting writing talent, seek out new voices, organise public panel discussions about topical issues in literature and publishing, launch writing competitions, support the development of new work and generally inspire creativity and energy in anyone who encounters them. This autumn, their great achievement was to bring to public notice one of the most thrilling, searing and original writers I've ever read - the poet Warsan Shire, who is the inaugural poet laureate for London. Read the BBC's coverage of her appointment here. As The Bookseller and The Evening Standard report, her appointment was announced by Poet Laureate Carol Ann Duffy. I believe that Shire, along with Malika Booker, are the two most exciting poets and riveting performers creating in the UK today.

After many years of hosting panel discussions with critics and authors, mapping the changes in the industry and encouraging fresh work from hundreds of writers, both emerging and established, Spread the Word are stepping up and becoming publishers in their own right. Introducing.... Flight Press:

I love that inky, indelible looking black block-printed star and punky grassroots Soviet template font. Initially producing sleekly formatted e-books, Flight Press plans to create limited edition, lovely-to-have-and-hold publications like the gorgeous volumes made by Pereine Press and & Other Stories, who published the 2012 Booker-shortlisted breakaway hit, Swimming Home by Deborah Levy, which I discuss here in an essay entitled Even The Rich Suffer.

The debut release by Flight Press is an anthology called Edgeways. Initially an e-book, the anthology brings together the winning and shortlisted writers of the 2013 Spread the Word writing competition for short fiction, which I judged alongside the writers Courttia Newland and Tania Hershman. In judging fiction I am always reminded that talent is not scarce but common. It's waiting to be discovered and is richly deserving of a platform, publication, critical attention, readerly celebration and support from the wider industry.

Courttia Newland's fiction is passionate, topical, fierce; he writes with urgency, great observation and grit. Tania Hershman's short fiction combines cerebral intensity, bullseye imagery and technical precision. And I'm super company at lunch. The winning story in the competition was Living It Edgeways by Claire Sita Fisher. We loved it for its upfront, fresh, mobile voice and impeccable creation of character. The story's narrated by a young guy whose humour and streety restlessness hide perceptiveness and vulnerability. Fisher's story was cut through with witty observations about city life, street slang and the effects of one incident on an entire family. 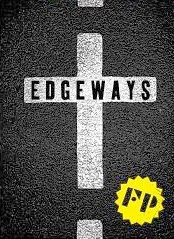 Edgeways the anthology has been edited by Courttia Newland, who's written an introduction about the competition's shortlisted entries, explaining what we were looking for, where we agreed and where we politely diverged. Tania Hershman has also contributed a piece of her unutterably perfect short fiction. The competition entrants whose pieces made the shortlist are Claire Sita Fisher with her winning story, Nick Black, KJ Orr, Toby Litt, Deirdre Shanahan and Saradha Soobrayen.

I have contributed an essay called The Story Ritual, about the art and craft of the short story. I've also written a new story entitled The Comforting of Children. It's my first work of original fiction since Dust, in November 2011. The success of that story, which can be read here, reprinted by the University of Chichester, gave me the faith to write The Comforting of Children. I can't think of a better way to explore the craft of short fiction than by being a small part of  new anthologies whose originality make such a strong case for the power of literature and the excellence, diversity and prevalence of new voices.

Edgeways is available now as an ebook, published by Flight Press and edited by Courttia Newland.