I wanted to support The Sea of Innocence, the Costa-winning novelist Kishwar Desai's latest book, which will be published by Simon & Schuster on 30th May in hardback at £12.99. The text below is from the press release - but I love Desai's novels for their brilliant combination of urgent topicality, taut plotting, strong style and an unforgettably clever, funny and resourceful heroine. 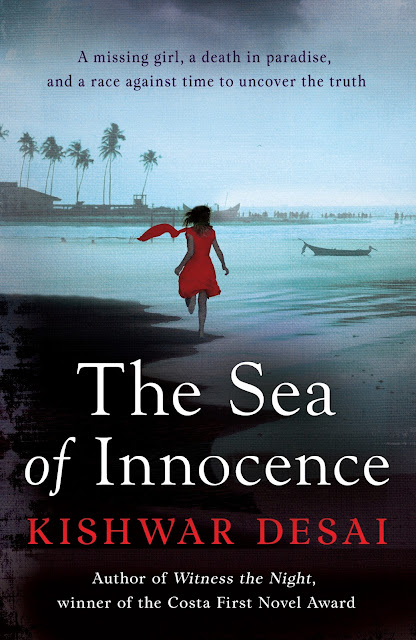 Kishwar Desai sprang onto the literary scene in 2010 with Witness The Night, which introduced the characters of the tough, cool social-worker-cum-detective heroine Simran Singh, who was investigating a murder case and tackling the issue of female infanticide. This powerful debut went on to win a Costa and was also longlisted for The DSC Prize for South Asian Literature, The Man Asian Literary Prize and The Impac Award.

Desai’s second novel, Origins of Love, saw Simran travel between Delhi and London in a story involving the exploitative, largely unregulated and hugely profitable international surrogacy industry. It
received rave reviews and helped spark a global debate - which I wrote about in this New Humanist piece.

In her third novel, The Sea of Innocence, Desai’s heroine Simran is holidaying in Goa with her daughter when she is sent a video of a blonde teenager alone with a group of Indian men. The teenager is missing and Simran knows she must act, and fast, in order to save her. Everyone seems to know what has happened to her, but no-one will talk. Soon Simran herself is targeted to force her into silence and her Goan paradise becomes a living nightmare.

Like all Desai’s novels, The Sea of Innocence is a gripping detective story, but it is also the exploration of a serious social problem. In 2011, 21 British Nationals died in Goa and the book reflects on the infamous case of Scarlett Keeling, who was raped and murdered there 5 years ago, and the recent gang rape in Delhi. Desai looks at the role of women in India. She explores how, in the age of globalization, such issues affect all of us.

Kishwar Desai is an author, broadcaster and journalist who splits her time between Delhi, Goa and London. She will be in the UK around publication and will be available for interviews and to write features.