"Nothing for us, without us." Women rise in Afghanistan, Malawi, Nepal, Zambia, Zimbabwe and Ghana.

In February Womankind Worldwide welcomed their partner women’s rights activists from Africa and Asia to London to share their experiences and expertise of women’s leadership and political participation. Further images from the day, all taken by Abi Moore, can be viewed at the bottom of this article. 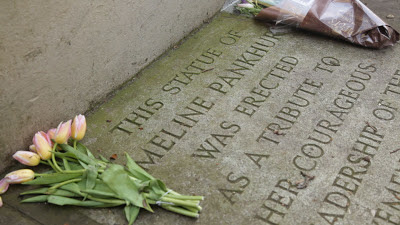 From countries as diverse as Afghanistan, Ghana, Nepal and Zimbabwe, participants faced a similar challenge – how to overcome the exclusion of women from political and public life.  Despite their different contexts, cultures and political systems, the women highlighted some common problems and common solutions.

Women’s voices must be heard from every corner and at every level. Women are not a homogenous group, and their participation in politics must reflect their diversity.  Durga Sob, founder of the Feminist Dalit Organisation of Nepal said,

“Dalit women are doubly discriminated against in political parties – Dalit forums are run by Dalit men, and women’s wings of parties are run by ‘high-caste’ women."

Young women, disabled women, women from ethnic and religious minorities often face multiple barriers to accessing decision-making spaces, and they must be supported.

The women were united in their commitment to focusing on local as well as national politics. Local level is where many of the decisions affecting women’s daily lives are made, and as Wangechi Wachira from Kenya’s Centre for Rights and Awareness said,

“to be a leader, it starts at family level, and then changes happen at community level.”

“we need to find space for women to speak about the issues that affect them, even when it’s difficult."

In Afghanistan, where 87% of women have experienced some form of violence, and women activists and politicians are routinely threatened, attacked and killed, this work is vital and dangerous.

Women’s rights organisations help to build women’s confidence and skills, create opportunities and access to political spheres. When women do get into positions of influence and power they are supported to negotiate corridors of power, build networks, and advance women's rights.

The activists were unanimous in the need for affirmative action to level the playing field between women and men.  Whether through political parties, reserved seats or quota systems, the only countries that have made significant progress are those that have taken specific measures.  And compared to those countries, the UK does not perform well.  In Afghanistan 28% of MPs are women, in Rwanda it’s 56% and Mozambique 43%, compared to the UK’s paltry 22%.

The voices of women from all walks of life need to be heard in all places of power. From community forums to the halls of national parliaments, and on the international stage, as Fanny Chirisa from Zimbabwe’s Women in Politics Support Unit said,

“Nothing for us, without us."

The organisations attending were as follows:

The Afghan Women Resource Centre provides practical education to girls and women who were forbidden to learn under the Taliban.Their programmes allow women to learn in a safe environment, with a focus on vocational subjects including journalism, business skills and tailoring, in order for women to be able to earn an income and live independently. They also teach literacy, civil & political rights, and women & family law.

Attending: Maryam Rahmani, Country Representative. Maryam got involved with AWRC by doing short management courses when she was at school in Peshawar, Pakistan. In late 2002 her family came back to Afghanistan, where AWRC had opened a sub-office, where she began working. In the meantime Maryam passed her exams and joined Kabul University, eventually graduating with an economics degree in 2007. The
university faculty board wanted to recruit Maryam as assistant to a professor but only on the condition that she left AWRC. Maryam refused as she wanted to continue helping women.

Potential female political candidates in Malawi often struggle with lack of funds, social pressures to stay at home and patriarchal political organisations. NAWOLG’s goal is to get more women to become involved in the democratic process as voters and representatives. It has a team of professionals specialising in gender, human rights and civic education issues, who help provide training and support to women inside and outside of politics.


The Feminist Dalit Organization was founded in 1994 by a group of Dalit (low caste) women aiming to fight for their rights and overturn caste and gender discrimination which causes women and especially Dalit women to be treated as second class citizens facing very high levels of sexual and domestic violence. FEDO educates women on their rights, offers counselling and organises mass protests and community events to raise awareness.

Partner attending: Durga Sob - FEDO. Durga Sob is a Dalit woman who founded the Feminist Dalit Organisation in 1994 to combat caste and gender-based discrimination in Nepal. Durga is renowned as a passionate feminist and activist in defending the rights of Dalit women in Nepal. She says,


“There used to be no Dalit women in positions of power. Now 25 Dalit women have been
elected as members of the Constituent Assembly and this is one my happiest achievements”.

ZNWL aims to promote the representation and participation of women at all levels of decision-making through lobbying, advocacy and capacity-building. It provides education, runs community forums, provides leadership courses in schools to boys and girls through their innovative ‘Girl’s Leadership Clubs’, monitors elections and provides support to women involved in politics, for example through Women’s Radio Clubs, supporting isolated rural women to gather to listen to news about politics and current affairs and discuss together so that they’re better equipped to take part in the democratic process.

Partners attending: Juliet Kaira Chibuta, Executive Director. Juliet is a development specialist and a journalist by trade. She worked for national print media organizations including the Zambia Daily Mail and National Mirror where she held various positions including editor. Ms Chibuta has also sat on various boards of media and women’s organisations.

And Beauty Katebe, National Chairperson. Beauty is a human resource expert and works in Zambia’s Ministry of Health. She has vast experience in women and youth issues, democratic processes, capacity building of women, governance and elections issues. She is the current National Women Council Chairperson of the Agriculture, Technical and Professional Union of Zambia.

The Women in Politics Support Unit (WIPSU) provides support to women in politics in Zimbabwe to help increase their participation and influence. It does this by providing leadership and election training for candidates; educates women MPs and councillors about their roles, connecting them with female constituents; organises community forums; and lobbies political parties to implement gender quotas.

Partner attending: Fanny Chirisa, Director. Born in Mutare, Fanny has worked with The Federation of African Women’s Clubs, The Voluntary Organizations in Community Enterprise, Red Banner, Zimbabwe Women’s Resource Center & Network and WiPSU. During the outreach process of the current Zimbabwean Constitutional Reform Process, Fanny was invited to be team leader representing civil society.
They led teams of reporters capturing the views of citizens across the country.

- Case study: Not Service But Power

Since its inception in Harare, Zimbabwe, in 1990, the network has grown to encompass 31 countries, 500 organisations and more than 1,200 individual members. At the national and international levels, the WiLDAF network lobbies for laws that promote women's rights. In Ghana, WiLDAF offers free legal counselling as well as training in legal literacy.

Partners attending: Bernice Sam, Executive Director (Ghana branch). Bernice Sam is a lawyer and human rights activist. She spearheads the campaign for the participation of vulnerable groups in democratic processes including organising women’s dialogues with presidential candidates. She also led the struggle for the protection of the rights of people in non-formalised relationships. Bernice has written and co-authored books on HIV/AIDS, violence against women and the property rights of women.

And Frank Bodza, Programme Manager for Governance (Ghana). Frank has more than nine years’ experience in both local and national governance; having worked with an MP for four years prior to joining WiLDAF in 2005. He is a gender and human rights activist who had carried out numerous public education programmes on women’s rights issues. He is experienced in capacity-building, mobilization, networking and coalition-building and was part of groups that observed the December 2012 general elections in Ghana. He is married with two children.

Richard Sam, Programme Assistant for Governance (Ghana). Richard did his national service with the Ministry of Local Government and Rural Development for one and half years before joining WiLDAF in 2009. He is a volunteer from WiLDAF Ghana on the Coalition of Domestic Elections Observers (CODEO) and the Civic Forum Initiative. Both groups have observed various elections including the December 2012 general elections in Ghana.

- Case study:  Ghana Elections: Time for Women to Rise, Not Fall
- Context can be found here.

The Gender Studies and Human Rights Documentation Centre works to promote and protect women’s rights, running a number of projects in rural Ghana working to end violence against women and reduce women’s vulnerability to HIV infection.

Partners attending: Dorcas Coker-Appiah, Executive Director. Dorcas Coker-Appiah is a lawyer by profession and a feminist. She is a women’s rights activist in Ghana and a member of a number of women’s rights organisations. Dorcas has a lot of international experience, having served two terms as a member of the United Nations Committee on the Elimination of Discrimination against Women.


- On work to end the practice of ‘widow inheritance’ read this piece here.

CREAW’s mission is to transform Kenyan society through the promotion and expansion of women’s human rights, rule of law and social justice. They provide legal aid and health services to thousands of female survivors of rape and domestic violence, produce informative radio shows and give training and support to community organisations.

- More info here on the Center for Rights Education and Awareness

Bidisha is a 2013 Fellow for the International Reporting Project. She is reporting on issues of global health and development.
Posted by Bidisha on Wednesday, March 06, 2013