Women of Iraq: power and resistance 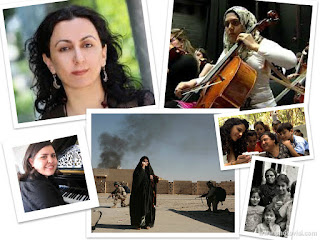 I am writing this after having sat in disbelief through Newsnight's Iraq: 10 Years On special tonight, in which they had 11 male speakers on stage, and just one woman. The speakers were not at all all high-level Iraq specialists and included newspaper journalists, the novelist Michael Morpurgo, politicians, writers and other politically-aware commentators with a general interest in the issue. Women experts and speakers from the audience were similarly strongly outnumbered. A very impressive woman who was a gender expert was asked about women in Iraq and gave an extremely important, troubling account of increases in trafficking, prostitution, forced marriage, rape, 'domestic' violence and the feminisation of poverty. This was simply passed over and not picked up again, as though what happens to women, the largest and most hardest-hit group in the country and in the world, is some kind of fringe, minority or side issue. Another comment the same woman made, disputing a panellist's claim that Saddam Hussein's rule had somehow smoothed over sectarian conflicts, was dismissed by Jon Simpson as "not very valuable." Thank you, white English man, for openly belittling and undermining an Iraqi woman who knows what she's talking about and thank you British Newsnight producers for making it clear that what happens to Iraqi women is not worth discussing after the issues have been brought up. And thank you for making it so clear by having 11 men and 1 woman onstage that you think women are not qualified in any way to talk about Iraq.

Newsnight is guilty of extreme discrimination against women and the argument that women speakers about Iraq, about war, about the Middle-Far East, about UK foreign policy, about public anti-war protests and about the war on terror are simply not available is totally specious. Next week the international culture and advocacy organisation The Abundance Lab and IWM North, part of Imperial War Museums, and are bringing together an all-women panel of inspiring speakers to share their tales of Iraqi women’s resistance, re-invention and strength for a unique event. Iraqi Women, Power and Resistance will mark International Women's Day and the 10th Anniversary of the 2003 Iraq War.

On Thursday 7th March 2013 from 6.00pm to 8.00pm at Imperial War Museum North, Manchester, you will hear first hand from women who fought for survival, freedom or challenged the status quo through activism, music and photography including:
If you can get there a bit earlier, from 5pm you will also get a unique advance preview of Iraq: Photographs by Sean Smith, the new display by The Guardian newspaper’s award-winning war photographer. It contains images on display for the first time alongside Smith’s award winning photography from before, during and after the Iraq War 2003.