International Women’s Day is on the 8th March. As Amy Dawson wrote in the Metro newspaper today, “Violence against women causes more deaths and disabilities among the global female population aged 15 to 44 than cancer, malaria, road traffic accidents and war.” Combined. She adds, “It is estimated that one in five women worldwide will become a victim of rape or attempted rape and one in four will experience domestic violence.”

The abuse of women is global and endemic – but equally, the fightback is also global, vocal and breathtakingly brave. We women number three and a half billion. For all the mocking talk about women disagreeing and not getting along, which I think is a myth, every woman on the planet certainly agrees on one thing: that women, men and children alike have the right to live, breathe, work, walk, laugh and speak freely without fear of violence, violation, abuse, exploitation, discrimination or any other type of abuse.

We are in the middle of an amazing time of rebellion, activism, questioning, freedom fighting and defiance and we should feel privileged, despite the injustices of the world. We have the opportunity to change that world by our actions, whatever the risks, and we are doing so. Protests against abuse of all kinds – financial, sexual, political, military – are happening all over the world.

Here are just a few of the campaigns being launched around International Women’s Day, which have been brought to my attention. The text below is from the respective charities’ press releases, read through and endorsed by me. 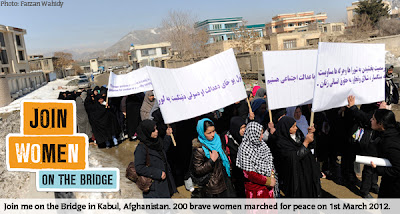 The charity points out the following facts:
Already, 200 brave women have marched on a bridge in Kabul, Afghanistan to call for an equal seat at the peace negotiation table. Last Saturday, 1,500 men and women marched together for peace and equality in their new nation, South Sudan, following many years of war and instability. 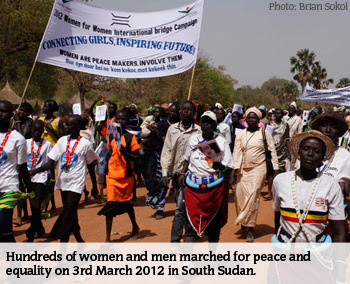 Women in Democratic Republic of the Congo and Rwanda are getting excited about International Women's Day and the opportunity to make the world a better place with the Join me on the Bridge campaign. You can help the women survivors of war and conflict in the eight countries Women for Women International work in - Afghanistan, Bosnia and Herzegovina, Democratic Republic of the Congo, Iraq, Kosovo, Nigeria, Rwanda and South Sudan - by making a donation now.
A different charity, Womankind Worldwide, is connecting women in a different but equally original way: bhosting a virtual march around the world. They write:

Nowhere in the world do women enjoy the same rights or opportunities as men. Every day women and girls face discrimination, poverty and violence. Globally, 10 million more girls are out of school than boys, and at least 1 in 3 women has been beaten, coerced into sex, or otherwise abused in her lifetime.

But women can transform their lives, their communities and the world if they have the right support. On International Women’s Day 2012 Womankind want to get the message out that the women’s movement is a powerful, global force for change.
﻿
﻿Join women and men in marching around the world and show that together we are a force to be reckoned with. You can also explore an interactive world map to find out about the pioneering projects making waves for women’s rights all over the world. And visit www.twitter.com/woman_kind or www.facebook.com/womankind to send a message of support to Womankind’s partner organisations.
...And Theatre For A Change, whose work in Malawi I highlighted in this post, will have their gender equality campaign highlighted on their home page - with links to their newsletter.
I have also been contacted by Tender, who work with young people to foster non-abusive and non-coercive relationships. Here's what they have to say:

Seven years ago, Tender designed a small pilot project for young people.  The aim was to change attitudes.  We believed that by educating young people, we could break the silence surrounding domestic abuse and sexual violence.  We could empower young people to promote equality and respect. We started small.  In the end, we delivered the pilot to just 5 secondary schools in London, and we waited nervously for the results.

The response was overwhelming.  Young people and teachers felt there was a need for this project to grow, to reach more schools, and to involve more young people.   Today, our projects reach more than 100 schools and youth centres in a year. It’s been incredible to watch the explosion of activity by young people to end abuse.  Think back to what we achieved since this time last year on International Women’s Day.....
Help Tender celebrate the achievements of last year and invest in their future success with a contribution.  Your support would help Tender expand their campaigns and projects even further and equip even more young people with the skills they need to recognise and avoid violent and abusive relationships. Tender do not have the resources to spend time and money on heavy marketing schemes. They add:


We know that it is very easy to write empowering words about how strong we can be when we work together, but for Tender, we see the proof of that every day. We see it in the young girl who had the courage to leave her abusive boyfriend. We see it in the teacher who became more confident in approaching the issues of sexual violence with his students. And more importantly, we see it in the schools and youth centres that continue to deliver violence prevention after we’ve left.