On 27th April The Central American Women’s Network (CAWN) and Frauensolidaritäet are hosting a London-based conference, “Images of exploited and trafficked women: The role of the media and campaigning in women's empowerment”, at Friends House, George Fox Room, 173-177 Euston Road, London, NW1 2BJ. 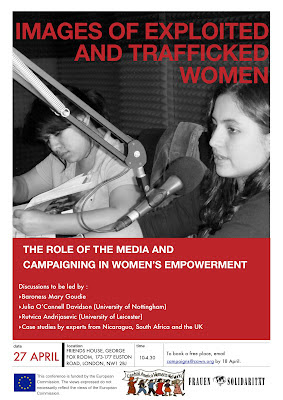 While there has been growing awareness over the last decade as to the urgency to address trafficking for sexual exploitation and exploitation within the sex-industry, advocates have not always agreed on the most appropriate approach to tackle it. Debates are played out and amplified by media stories, backing the prevalence of dominating discourses.

The conference intends to be a forum for the effectiveness of such approaches to be discussed and for their complementarities to be explored. It will bring together speakers from the policy, academic and NGO fields to examine current efforts to counteract the trafficking and exploitation of migrant sex workers. Plenary discussions will be followed by three workshops which you may sign-up for in advance.

The event has been put together by CAWN and Frauensolidaritäet as part of their current project, “Women’s rights, social inclusion and the media” funded by the European Commission. If you would like to attend, please RSVP to campaigns@cawn.org by 18th April.

The day's itinerary is as follows: