Are you ready for a concrete future? Laura Oldfield Ford is a visual artist whose talent was developed at the Slade and the Royal College but whose sensibility is chiselled into fineness by the streets, blocks and derelict spaces of East London. Savage Messiah is the name of her fanzine, a collection of exquisitely worked pen and ink drawings that reveal the rigour of her Fine Art heritage, spiked with political awareness, polemical anger and a born documentarist's passion for people and places. The original fanzine editions were handed out in lots of 20 or 30 at a time but have now been collated in a fat, beautiful, black-paged book published by Verso, whose promo page can be found here. The book features an excellent introductory essay by Mark Fisher and Ford will be speaking at several UK events in the coming weeks.

Ford is as much a fine artist as a streetpunk. Alongside the development her work through fanzines, fliers and flyposters she is shown in traditional gallery spaces and will have a solo exhibition at the Hales Gallery from 25th November 2011 onwards, featuring billboard images of her work. I welcome the scale of a gallery-sized project, as Ford's art deserve grand and close inspection. How ironic it should be that the very yuppies - wealthy young City professionals buying up newbuild penthouses in edgy East London - should hang her work on their exposed brick walls. Given the mainstream acclaim Ford has received and deserves I almost think the 'zine, which is also published online, belittles the industry behind the images. It is clear that each one is the product of many hours' closeted studio work by a creator who has developed her craft with great commitment and discipline. I want to see them up close, on great quality paper, framed, large scale, in the peace of a gallery, with all its institutional endorsement. And I would like to be sent a big one so that I can have it for myself.

Savage Messiah is reportage turned into art of breathtaking precision, political sensitivity and power. On day-long research walks of ten miles or more, Ford covers everything from 'Hipster HQ' - the rapidly-developed and quickly gentrified areas around Dalston, Hackney Wick, Haggerston, Homerton and Shoreditch - to the poor, unhip council blocks which have received no funding or improvement despite endless promises, to the corporation-plundered once-wastelands of the far East London 2012 Olympic site. The chillingly named Olympic Delivery Authority has sealed off this area with a concrete wall surrounding what will be the Athlete's Village, supported by numerous international leisure brands policed by private security firms.

Ford observes, sketches and photographs these areas, which are simultaneously forgotten and earmarked for exploitation, making notes and speaking to residents. The result is not straight reportage or urban landscape recording but reality with the zoom lens sniper eye tuned to the max. The cracks in walls, the scrubby greenery growing between slabs, the broad backs of massed riot police and the sad, scratchy graffiti cut into the page with intense monochrome menace. There is, appropriately, a savagery and sharpness underlying Ford's work, equal parts anger, despair, love and urgency. The images are beautiful and terrible: fantasy figures of fashion brand advertising on hoardings next to blocks of flats with smashed out windows.

I would like to see equal recognition of the complementary element of Savage Messiah: the text. Printed in white Courier font on the inky matte background, Ford composes journalistic essays based on her observation of the sites she visits (her riffs on the gleaming monstrosity of Westfield shopping centre are hilarious), reports on her experiences and relays candid conversations with the many hundreds of residents of the unglossy areas usually ignored by lifestyle mag articles on the coolness of the East End. The stories are sad, funny, tragic and true. They are not reported verbatim but are as honed, edited, balanced and polished as the visuals.

Savage Messiah functions as both a literary and an artistic history of the vast geographical area Ford covers, often starting with a present moment like a property earmarked for demolition or an area blocked against wanderers or trespassers. It then moves back in time to excavate the experiences of locals, uncover previous uses of the site and reveal many different biographical, architectural, social and cultural manifestations across the decades. It is as much a seemingly-spontaneous (but actually highly refined) postwar people's history as a fierce and visually stunning contemporary elegy for an East London that will soon be engulfed in the razzmatazz of the 2012 Olympics - before being abandoned once more. 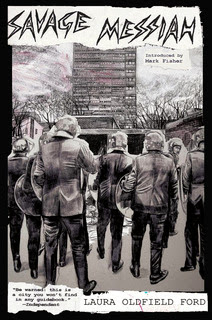