Women's cultural and political activism continues apace, in the strongest wave of the women's movement that we have seen for more than 20 years. Between 4th August and 4th September 2011 at the Canongate Venture, 5 New Street, Edinburgh, EH8 8BH, artist Tamsyn Challenger is showing her hugely acclaimed and important work 400 Women (click the link for images and for links to the thoughtful, copious and supportive press coverage the project has received). 400 Women responds to the brutal rape and murder of thousands of women in the Mexican town of Ciudad Juarez and, more generally, to gender violence across the globe. Challenger has brought together a critical mass of nearly 200 international artists including Paula Rego, Maggi Hambling, Swoon and Humphrey Ocean in a site-specific portrait installation. First exhibited to great acclaim in 2010 in the basement of Shoreditch Town Hall, it is shown for the first time in Edinburgh in a dilapidated schoolhouse. ﻿
﻿ Curated by Gemma Rolls-Bentley, the exhibition will be installed in the Canongate Venture. The project began in 2006 when Tamsyn Challenger traveled to Mexico and met with some of the families of murdered and missing women, most of whom were extremely poor. Challenger was affected by her meeting with one particular woman, Consuelo Valenzuela, whose daughter Julieta went missing in 2001, when she was 17. Consuelo pressed postcards that had been generated as an aid to finding her daughter into the Challenger’s hands. She recalls, “Julieta’s face, looking up at me, was such a poverty of an image. It had been reproduced from a snapshot but the face was blurred and faded, she had no eyes really and a bleached out nose. I think I just wanted to bring her face back.”

On the flight home the artist formed the idea for what has become 400 Women. The concept relies on a large-scale collaborative force with each artist representing one of the murdered women chosen for them, in some way invoking her, so that she can challenge humanity. Each image produced stands as a statement against gender violence. 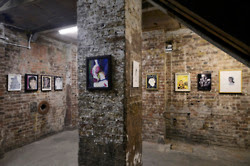 Challenger has obtained over 100 images through Amnesty International's Mexican team, the group Nuestra Hijas de regreso a casa, and the Casa Amiga Rape Crisis Centre in Ciudad Juárez. For some women no image is extant. For these cases Challenger has asked the artist involved to use the woman’s name as they wish within the piece. Each portrait is on a uniformly sized media of 14” by 10” echoing “retablo” (behind the altar), the iconic imagery of the Catholic Church that remains such a strong force in Mexico.

Explanations for the murders, which continue to this day, range from serial killers to organ fielding, the use of women as prizes for drug cartels and domestic violence. Most sinister of all is the possibility of so-called sexual violence tourism. The continued disappearance of women in Mexico and elsewhere in Latin America demonstrates a culture’s disregard for the rights of women as human beings. Despite media coverage of the issue, the murder of 300 women in 2010 and the disappearance of many more attest to the fact that little is changing. The killers continue to enjoy impunity in the region, which has had a knock-on effect throughout the country. The Mexican authorities have seriously mishandled each investigation into these murders and in August 2006 the Mexican federal government dropped its investigations into the murders, concluding that no federal laws had been violated.


Artist Tamsyn Challenger trained at Winchester School of Art and KIAD. Her work has been exhibited in the Truman Brewery and Candid Arts in London and with the Magdalena Festival in Barcelona. 400 Women received a great deal of press including being one of the Guardian Newspaper's top 5 exhibitions of the month. Tamsyn was interviewed for Radio 4, the World Service and BBC2's the Review Show. Her first solo show 'The Tamsynettes' was at Transition Gallery in Bethnal Green in March 2010. The Tamsynettes year 2 has recently been shown as part of the Beaconsfield Project's show 'Fraternise-the Salon'. This conceptual work encompasses her fascination with mortality, portraiture and self-portraiture and poses feminist questions revolving around beauty and the aging process.

Curator Gemma Rolls-Bentley’s projects in London, Edinburgh, Berlin, Warsaw and Sydney have presented international modern and contemporary artists. She completed a masters of art at both Edinburgh University and the Courtauld Institute of Art. She has contributed in an editorial capacity to a number of publications, including Sarah Wilson’s The Visual World of French Theory, and was the art editor on the anthology The Wall in My Head: Words and Images from the Fall of the Iron Curtain. In 2006 she co-founded the not-for-profit organisation Polish Art Scotland that presented a number of exhibitions of new Polish art, architecture and design in Scotland and that continues to conduct a varied events programme. She is currently exhibitions and production assistant at Damien Hirst’s company, Science Ltd. and in 2011-12 she will curate Tamsyn Challenger’s 400 Women as it tours internationally.


Text taken from press release. Copyright is to the artist, curator and participants, not to me.
Posted by Bidisha on Thursday, July 21, 2011