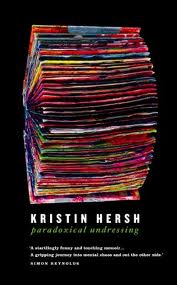 Kristin Hersh’s memoir is a spiky scrawl of memory, music, the muse and amusement.
Kristin Hersh is my heartbreak singer. Her solo album Hips and Makers soundtracked my teen weekends with its echoey beauty and wiry, soaring sound. Hersh’s solo work, as well as her output with her band Throwing Muses, established her decades ago as one of the handful of true genius songwriters, composers and performers working today. That reputation is stronger than ever now.
Paradoxical Undressing is the non-fiction telling of how Hersh became Hersh. With snappy cleverness and terse wit we come to know of her talent, her smarts and her clout as well as her internal creative struggles. It is, incidentally, a beautifully presented book featuring artwork created by Shinro Ohtake on the cover.
Factually, it reveals much about Hersh that fills the reader with awe. She was a child prodigy who formed Throwing Muses in 1981 when she was fourteen. They were an instant success, but this did not distract Hersh from starting university when she was fifteen. The intensity which came out in the Muses’ work was a direct result of their frontwoman’s intense talent. Her countless ideas, plans and inspirations could not all be sublimated in creativity in good time and eventually took their toll. She attempted suicide at eighteen and was ultimately diagnosed as bipolar.
Paradoxical Undressing’s unflinching and unsentimental look at mental illness succeeds because it is narrated by a fundamentally sound, frank, funny individual whose interpretations we trust. We are even frequently delighted by them. This is Hersh on the joys of canine prescience: “Zoe was never wrong. She could catch a Frisbee ten feet in the air and catch a problem ten minutes before it happened. She’d refuse to get in a car headed for the vet’s office, but she’d leap joyfully into one that was going to the beach. She loved children and cats and hated snotty rich people.”
Don’t we all? With its mix of darkness and quirky light, Paradoxical Undressing is the perfect book for a Hersh fan. In many ways it’s exactly what one would expect: witty, jaggedly perceptive, suffused with dense creativity and sensitivity. The book contains some of the most perceptive and interesting writing on composition I’ve ever read:

Play colours, I think to myself, as the swishing voices conspire against me. This song doesn’t sound like colours, it sounds like…machines. …There are notes in there, though. I find them and play them, reduce the industrial noise I hear to a pathetic plunking. That melody needs a bed and chords come only through trial and error. So when a sound the guitar makes matches the sound that’s filling the Bullet, I keep that chord and move on to the next one. It gets easier each time, as one chord will set up the next, words in a sentence, then voices in a paragraph.
Voices playing counter to the guitar parts then form themselves into a kind of phonetic melody. These syllables pile themselves up into words and say things that are hard to grasp, hard to control, and I plug my ears to their meaning. I know I’ve lived the stories they tell, but I never wanted to tell them; the songs do. I’m just playing along.
…If I try to jump into the song and write it myself, sorta hurry it along, my lyrics’ll stick out like ugly relatives. You can tell it’s me talking because suddenly the song isn’t beautiful any more – it just makes sense. Or worse, it’s clever.
The real song waits patiently for me to shut up and then picks up where it left off: time-tripping, speaking in math, bodies and dreams, landscapes, passed notes, pages from this diary, conversations, memories, newspapers and unmailed letters that crawled back out of the garbage – sometimes sweet, sometimes angry, sometimes funny, but always twisted up and painted in extravagantly ugly technicolour: well-rehearsed Tourette’s.
It’s not like I’ve embraced the songwriting process. I haven’t even accepted it; it’s too creepy. There’s an electrical component, for example – the lightning rod thing. I get all flitchy and my hair stands on end, like a seizure. With a heightened awareness of …meaning, for lack of a better word, that feels like possession. Whatever is important at that moment will jump up into the air and grab my electrified brain.

I have never witnessed an artist explaining themselves with such thrilling pithiness, ardour and (at the same time) mystery, and reading passages like these is exhilarating. There is also an ever-present wit which twangs laconically from Charlie Brown deadpan to wild mischief, an indie-rock imp laughing at the unnoticed absurdities of life: “According to Massachusetts law, because we’re too young to drink, we aren’t allowed anywhere in the building during business hours except the dressing room (where all the free beer is) or on the stage (where the rest of the free beer is).”
Given the poise of the prose it’s amazing that much of the material in Paradoxical Undressing is from Hersh’s teenaged journals. Throughout, there is a dry humour and a pleasing circumspection about fame that frankly eludes many musicians of much more advanced years: “My band is very suspicious of its fans. We could stand to buy a little of our own hype. When people come to our shows, it confuses us; we can’t imagine what they’re doing there. We like Throwing Muses ‘cause we are Throwing Muses. But why do they keep showing up?”
Hersh’s comic timing and ability to keep the notes of a joke (and a song) going do make me think that should the musical muse every dry up, she could write straight up satirical TV comedy and not miss a beat. However, behind the jokes, wisecracks and observations, the vignettes about life on the road, the freaks and freakouts and the smart character portraits, is a sense of brooding heaviness. There is little empty air to breathe in the book. That which there is, is full of unwritten music, dry ice from gigs, cigarette smoke and dark anxiety. The atmosphere of the book is thick with fears, intimations, snags and songs. One has the impression of the writer scribbling her sentences, the writing too small and cramped, pressed hard into the paper, holding the pen in a strangling grip.
Ultimately the value of Paradoxical Undressing is that it does not represent Hersh as a girl-gone-wild, a lost girl, a crazy girl, a girl who got lucky or got saved or got inspired or any other belittling stereotype. Instead she comes across, with admirable frankness, as what she is: a woman of talent, intelligence, strength, complexity, standing and drive. This is a book about the power of creativity and the joy of music, the buzz of performance, the thrill of songwriting, the bliss of singing, the fun of touring and the absurdity of band life. Along the way there are fellow travellers, some creepy, some quirky, but above all there is a purity of purpose and a powerful sense of Hersh’s vocation – and her genius.
Paradoxical Undressing is published by Atlantic Books.

NOTE: Hersh is a co-founder of the non-profit Coalition of Artists and Stake Holders (http://www.cash-music.org/) who record and release music without a record company. Her current work is entirely listener-funded and is available free of charge and free to be shared via the Creative Commons license.
During 2011 Kristin Hersh is making available a series of four session recordings in which Throwing Muses performs songs inspired by Paradoxical Undressing. These collections will be available for download via her web site, http://www.kristinhersh.com/seasonsessions, and will be released in four special edition CDs, The Season Sessions – Fall, Winter, Spring and Summer.
Posted by Bidisha on Sunday, May 01, 2011