﻿
﻿
Iwona Blazwick OBE, Director Whitechapel Gallery and Chairwoman of the Max Mara Art Prize for Women, has announced artist Andrea Buttner as the winner of the third Prize. Büttner, who lives and works in London and Frankfurt, was honoured at the prize giving ceremony at London’s Whitechapel Gallery on 23 March. Shortlisted artists Becky Beasley and Elizabeth Price were also in attendance.


From 1 to 10 April 2011 at the Whitechapel Gallery. Andrea Büttner, the winner of the third Max Mara Art Prize for Women in association with the Whitechapel Gallery, will be showcasing the work of art made on her Italian residency after winning the Prize. Her work explores the crossover between religion and art using traditional materials such as woodcut prints. In the last five years Büttner has held solo exhibitions at Pawn Shop in Los Angeles, Crystal Palace in Stockholm, Goethe-Institute in Dublin, the ICA in London, and in 2009 at Croy Nielsen in Berlin, amongst others. She has studios in East London and in Frankfurt. There is an excellent write-up of her work at The Guardian, here.

The Max Mara Art Prize for Women promotes and nurtures talent based in the United Kingdom, enabling artists to develop their potential and providing each winner with an opportunity to produce new works of art. The Prize is awarded biannually to one UK based artist who has not previously had a major survey exhibition. Winners receive a fully funded six-month residency in Italy, based at the American Academy in Rome and the Pistoletto Foundation, Biella, as well as funding to realise a new work or works that will be exhibited at the Whitechapel Gallery and acquired by the Collezione Maramotti, Reggio Emilia, Italy.

For each Prize a judging panel of four art-world professionals, chaired by Iwona Blazwick, devise a short-list of between three and five artists. The short-listed artists are invited to the Whitechapel Gallery to make a presentation about their practice and the work or works they would make during or resultant from their Italian residency and funding.

The Max Mara Art Prize for Women celebrates the diversity and dynamics that female artists brings to the contemporary art scene in terms of aesthetics and discourse and provides them with a platform in which to reach a widespread audience. It is a unique initiative set up to promote and nurture female artists based in the United Kingdom, enabling artists to develop their potential through the conception of a new work. Shortlisted candidates are asked to develop a proposal for their desired projects, which is then judged by an all female panel. The inaugural Max Mara Art Prize [2005 – 2007] was won by film-maker Margaret Salmon and the second edition of the Prize [2007 – 2009] was won by Hannah Rickards who works with sound, video and installation.

The jury for this third edition of the Max Mara Art Prize for Women 2009-2011 was announced on 9th September 2009 at the Whitechapel Gallery on the occasion of the special opening of the film No, There Was No Red [2009] by Hannah Rickards. Chaired by Iwona Blazwick, the new jury comprises; Fiona Banner, Turner Prize nominated artist; Alison Jacques, Gallerist; Valeria Napoleone, Collector and Polly Staple, writer and Director of Chisenhale Gallery. 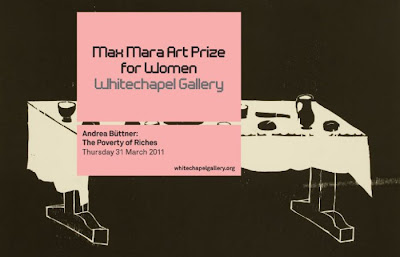 ﻿
Text taken from The Whitechapel site and from the offical MaxMara Art Prize press release. Copyright is theirs, not mine. ﻿
Posted by Bidisha on Wednesday, March 16, 2011