Diamanda Galas rips up the Barbican this April

International performer Diamanda Galás will be launching her first major film collaboration, Schrei 27, at the Barbican's avant garde Spill Festival on April 22nd. Galás has been in the headlines in New York recently with the banning from their National Portrait Gallery of Fire in My Belly, a film by David Wojnarowicz which was inspired by Galás’ famous AIDS requiem Plague Mass and features one of her songs.
Schrei 27 is a 27-minute film comprising several 'chapters' which follow a person (played by Galás and a male actor, Salvatore Bevilacqua) who is taken into a mental hospital after being arrested for treason and is then subjected to horrific psychological and physiological torture in order to extract a confession.  Galás has created a unique vocal soundtrack of raw human sound, calls, chants and silence.  The score features passages - including extracts from the Book of Job and St. Thomas Aquinas - about transitions between life and death, salvation and condemnation, sanity and madness.
The film, by Diamanda Galás and Davide Pepe, will be at the Spill Festival of Performance at the Silk Street Theatre, Barbican, London, from 1 – 9pm on 22nd  and 23rd  April 2011. The Spill Festival of Performance at the Barbican Centre is an artist-led biennial festival of experimental theatre, live art and exceptional artists from around the world.  It was initiated in 2007 by artist/performer Robert Pacitti. His 2011 Festival is curated around the idea of ‘infection’.
The film presents a powerful unrelenting psychological and physiological portrait of trauma caused to enemies of the state in a "medical facility" where trained doctors deliver incremental changes of shock, light, heat and cold to their "patients" in confined spaces.  Schrei 27 was commissioned from Galás by New American Radio in 1994, to explore themes of political or personal asylum and institutionalisation. It was further developed as Schrei X in 1996, as a live performance staged in darkness, and in 2007 curated as a quadraphonic installation, again in the dark, in Spain and the Canary Islands.
This is Galás’ first major film collaboration with Bolognese film and video artist Davide Pepe whose most recent feature Giardini di Luce, was presented at the 60th Berlin Film Festival’s Berlinale Shorts Competition.
Hailed as one of the most important singers of our time, Diamanda Galás has earned international acclaim for her highly original and politically charged performance works, as well as her innovative treatment of jazz, blues, and rembetika.
Born to Anatolian and Greek parents, Diamanda Galás has lived in New York City since 1989.  She came to international prominence with her quadrophonic performances of Wild Women with Steak Knives (1980) and the album The Litanies of Satan (1982). Later she created the controversial Plague Mass, a requiem for those dead and dying of AIDS, which she performed at Saint John the Divine Cathedral in New York City in 1990 and released as a CD.  In 1994 Galas and Led Zeppelin bassist John Paul Jones collaborated on the visionary rock album, The Sporting Life.  Over the past two decades Galás’s wide range of musical and theatrical works have included The Singer (1992), a compilation of blues and gospel standards; Vena Cava (1993), exploring AIDS, dementia and clinical depression; Malediction and Prayer (1998), a setting of jazz and blues as well as love and death poems by Charles Baudelaire, Pier Paolo Pasolini and Salvadoran guerrilla fighter and poet Miguel Huezo Mixco; La Serpenta Canta (2004), a greatest-hits collection from Hank Williams to Ornette Coleman; Defixiones, Will and Testament (2004), an 80-minute memorial tribute to the Armenian, Greek and Assyrian victims of the Turkish genocides from 1914-1923; and Guilty Guilty Guilty (2008) a compilation of tragic and homicidal love songs.
Galás has contributed her voice and music to Francis Ford Coppola’s, Dracula, Oliver Stone's Natural Born Killers, Spanish/Nicaraguan filmmaker Mercedes Moncada Rodriguez’s El Immortal, and films by Wes Craven, Clive Barker, Derek Jarman and Hideo Nakata. In 2005, Galas was awarded Italy’s first Demetrio Stratos International Career Award. Galas was featured in Roza von Praunheim's films POSITIVE (1991).  Video collaborations have included 'Sleazy' Peter Christopherson, Roza von Prauneheim's mix of David Wojanorowicz and Diamanda Galás in the censored and most popular version of Fire In The Belly and Fred Sodima's Judgement Day. 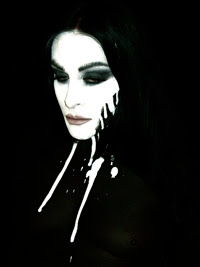