I was looking for a good film and I found Perfection

Am writing this in the same week that there has been great news from the Underwire film festival and the Birds Eye View film festival, a couple of months after the London Feminist Film Festival, around the time Tina Fey and Amy Poehler were brilliant hosts of the Golden Globes, just after strong women led comedies like Pitch Perfect and Bridesmaids, after The Hunger Games struck and impressed me, in the same broader period that there have been stunning films directed by UK and US women including Angelina Jolie, Drew Barrymore, Floria Sigismondi, Lynne Ramsay, Lone Scherfig, Debra Granik, Phyllida Lloyd, Sarah Gavron, Madonna (yes, I loved WE and it was one million times more chic, more historically accurate, more sexy, woman-positive and less sexist than The King's Speech - 2 hours of speech therapy! I ask you), Lisa Cholodenko, Andrea Arnold, Joanna Hogg, Diane Biers, Kathryn Bigelow, Samantha Morton and Sam Taylor-Wood.... 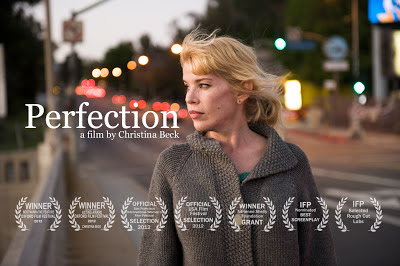 Perfection, directed by Christina Beck - latest one on my long long list of coolest women in the world, and her web site will lead you to many more - is a multi award winning film which has been a hit at festivals worldwide. It is now receiving its UK premiere on Saturday February 9 at the Rio Cinema, 107 Kingsland High St., London, E82PB at 2.30pm. You can buy tickets here and, no, Christina Beck is not a personal friend of mine although hey here's hoping.

Perfection is a smart, contemporary take on LA life, freshening up the old myth of the city of angels and its anxious, constantly-striving inhabitants. As well as the sexy love story it also tackles grittier matter: ageing, pain, self-harm, self-obsession and self-criticism. Says Beck,


Perfection is an eye-opening portrayal of the city rarely seen in mainstream Hollywood movies. The film tells the story of Kristabelle, a 30 something who still lives with her mother and cuts herself to feel alive. Her mother is addicted to plastic surgery, trying to regain her youth. Through the help of a pot smoking young lover and a newly sober British stand up comic, they all find that love can be more than skin deep.

And....behind the scenes there are some amazing women and cool guys. Here are the personnel details. Enjoy.